My Attempt to Live in a Tiny Home 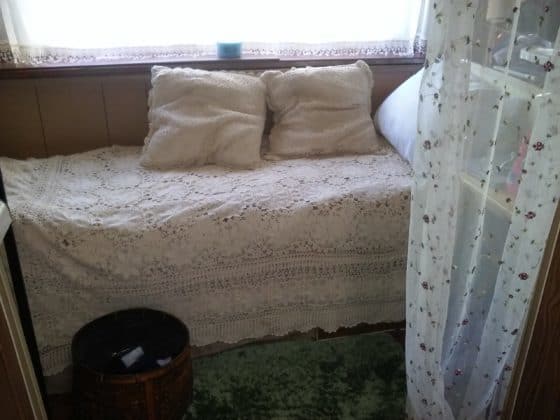 I loved Tiny House Nation. I would binge watch episodes and dream of living in my own tiny house. I saw Youtube videos of people who downsized and were so happy with their little traveling homes. A sixteen-year-old girl (with help from her father) built a gorgeous little place, and a 70 something-year-old woman who had absolutely no experience built her own traveling house and offered sustainable living workshops for women around the country. Plenty of people used free, recycled materials to build, found trash, bought from Habitat for Humanity stores, and got free materials from Craigslist. Many people got incredibly cheap old trailers or RV’s and renovated them. How hard could it be?

I watched videos and the reality shows for a few years and bought a few books on living full-time in a recreational vehicle. Finally, I bought a dirt cheap travel trailer that you tow behind a jeep or SUV, even though I didn’t own a car- or a license!

It looked so simple. You build a little home by yourself, or renovate an old RV or trailer, add some wood, get a composting toilet, some solar panels, and waalah! You’ve got a cute little house on wheels.

Yeah, it didn’t work out that way.

I bought a 1979 Shamrock trailer on Craigslist, sight unseen. The guy insisted there was “Nothing wrong with it, absolutely nothing”. Let’s call him Scott the Scammer.

Um…I paid $375 for it. I knew what I was getting into. I figured if it didn’t work out, I could just sell it. I knew I would need to invest in it, but when I pressed Scott, he promised that any “minor repairs” and cosmetic work would be fixed by his friend for “less than $1,000”.

And, he sweetened the pot; I could keep the trailer parked behind his house indefinitely for as long as I wanted to, and he would hook up the water and electricity for me for only $100 a month. I could still keep my NY place until I decided whether or not I would like to officially move to Florida or not.

I burst into tears when I saw the trailer for the first time.

It was far worse than I expected. I know, I know, I paid almost nothing for it, but I had no idea that it was pretty unliveable while it was being renovated. It was horrible; walls were falling down, there were water marks and stains all over the ceiling, the bed was covered in fleas and rat droppings, and there was a strong scent of mold on the air. There was no way I could stay in the trailer, and had no idea if it would be possible to even fix all of the repairs needed. And, I was on a very tight budget. How the hell was I supposed to stay there?

But, I didn’t have a choice. Well, actually, I did have the option to stay in one of the extra bedrooms Scott offered me until it was renovated. However, I quickly found out the reason Scott and his lovely wife lived in two homes even though they were still together.

They were both hoarders. Not so much with things; with dogs.They each had over 25 dogs.

They both had huge houses and enormous yards, but damn. I chose to sleep in my trailer.

What I didn’t know was that Scott’s home, and now my new home, was not the idyllic, palm tree lined, beachfront property he had tried to convince me that it was. Hollywood, Florida does have a lovely beach, and it is fairly close to Ft. Lauderdale and Miami, but the part of Hollywood I was living in was pretty damn scary, even for me, a hardcore New Yorker. I’m from Brooklyn! But this tough gansta’ made sure to be home when the street lights came on in Hollywood.

Of course, it cost me more than $1,000 to fix everything. His friend did fix the water and electricity, and I bought a solar shower and portable toilet. He put in a new floor, (at least, the tiles looked like a hardwood floor) and put new sheet rock up. I immediately bought a used fridge, microwave, and hot plate from the Swap Shop. Luckily, I was able to buy a new bed really cheap. I bought some beautiful curtains and matching bedspread and sheets.

My friend Wendy drove me to a million mobile home parks, some run down and rough looking, others that looked pretty upscale with well-kept lawns and flower everywhere. All were out of my budget. Her husband had bought her a new barbecue grill for Christmas, so she gave me her old grill which was worth at least $700, and she brought me to the most amazing Greenmarket where I bought fresh blueberries and strawberries and tiny crystals to hang in my windows, and every morning the sun hit the prisms and scattered rainbows around my bedroom.

After a few weeks, I found some tiny white Christmas lights that were 75% off since Christmas had just passed. I bought a gorgeous wicker table and antique, lace tablecloth, a bamboo chair from Pier One that I paid $25 for, and some wicker baskets and some lush plants for a buck a piece. I splurged at Marshalls and Burlington and got some stunning crystal vases and candle holders. And then, I found the most beautiful, tiny, white antique loveseat. It was absolutely perfect for my tiny trailer. It looked like something from a castle, or Marie Antoinette’s bed chambers. A fellow from my food program gave me a brand new air conditioner that was too small for his home, but perfect for my trailer, and a new friend I met surprised me with a housewarming gift; a brand new, expensive dehumidifier. I loved it so much!

I put an ad on craigslist, offering a wok exchange, and I got hired to work for an AirBnB rental. I would clean after guests left, change linens, and give new guests the keys. In return, I would only pay $200 a month to park my trailer behind the AirBnB rental on a mini-ranch in a much nicer neighborhood in Hollywood. It was walking distance to downtown, and only a short bus ride to the beach.

I loved my little home so much! I dreamed of buying exterior, faux stone paneling and making my trailer into a little “castle”. I bought cheap little medieval dragon knick knacks from the flea market and browsed Etsy for things I would buy one day for my “castle”.

But, no matter how much I tried to make the trailer into a home, I knew that making it look pretty wasn’t enough. There was too much work to do, too many things wrong with it. The contractor had simply put up sheetrock over windows and walls that still leaked. Every time it rained, I could feel the mold spores entering my body, creeping into my veins, mixing with my blood. No matter how much I bleached and cleaned ad fumigated for fleas or mold or critters, I knew I would never be able to get my place completely free. It was beyond repair.

Eventually, I packed up my little hanging crystals and a few things I couldn’t bear to part with, and I put the trailer in storage.

I was so sad to be leaving Florida. I absolutely loved wandering around the Swap Shop or the Greenmarket on weekends. And I loved my FA (Food Addicts in Recovery Anonymous) 12 step meetings I belonged to. I will miss the beach, and the trolley I took from downtown Hollywood, and I would not get to have my weekly $14 lobster lunch at my favorite Tuesday afternoon restaurant on Dania Beach, where my friend and I would swat away bumblebees who were getting drunk off of our lemonade and iced tea. Mostly, I would miss my new friends.

Today I live in a small, but lovely two story duplex apartment. From my roof, I have a spectacular view of the Manhattan skyline, and the Empire State building lights up the sky on my right, and I watch beautiful sunsets on my left. I have a garden in the backyard where I grow much of my own food. My bedroom is romantic and comfortable with giant, fluffy pillows, a thick, feather down comforter, and the curtains are the same ones I used in my trailer home. My bathroom is decorated with medieval knicknacks, and I have a unique shower curtain of a lady knighting a knight, and I have a magnificent dragon toilet paper holder. I love having visitors from all over the world come to stay with me.

Perhaps someday I’ll get my dream of living in a castle, and be able to drive around the country in a tiny house. For now, I’m satisfied to have my “tiny home” that I can always come home to in NYC.