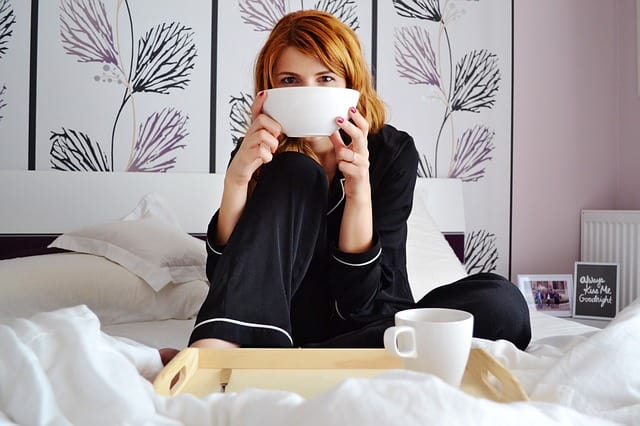 I used to get up at 5:00 am every day. In the beginning, I hated it but I had an early morning telephone meeting with a sponsor/ mentor in a 12 step food program, (similar to AA). I remember complaining about it one time to a fellow in the program, and she simply said, “Yeah I used to hate getting up early. I was fat. Now, I’m thin.”

Damn, her words hit me hard. She wasn’t being mean, she was just brutally honest, and she was right. Of course, getting up early doesn’t automatically make you skinny, but a 5:45 meeting each morning where I committed my food plan for the day, daily meditation and prayer, writing gratitude lists; all became part of a daily ritual that made it so much easier to be productive and stick to my goals. And yes, I got thin.

Now, I’m working hard to create my dream job as a travel blogger. There never seems to be enough hours in the day to do research, planning trips, writing blog posts, scheduling social media posts, or any of the other 500 things a day that need to get done. And sure, I could lay around in bed with my cute little bed tray cuddled up under my beloved feather down comforter, and my dog curled up at my feet. But that fantasy doesn’t last for long. Neighbors knock on the door unexpectedly asking to borrow something, my mom calls to ask me how the weather is in NY (even though I’ve been telling her for 20 years that since she lives less than three hours away the weather is usually exactly the same), my dog barks every time she hears people in the hallway, and my friends call to talk about relationship problems in spite of the fact that I repeatedly tell everyone that I’m working.

Another neighbor smokes weed nonstop, filling up my apartment with the potent smell of ganja, and before you get too excited, it smells more like cheap tobacco mingled with the stench from a homeless incense seller on the subway rather than the sweet aroma of a sexy rasta singing slow Bob Marley songs. No, this is the cheap ganja you buy with Snap food stamps, not the good shit.

But I don’t want to blame other people for the noise or stench keeping me from getting work done. I’m embarrassed to admit that Elizabeth Hurley and the rest of “The Royals”, half nekkid Game of Throners, and dead zombies capture my attention and have me hypnotized the instant my tiny little Amazon Firestick is plugged in and turned on, and when that happens; it’s over. The day is done.

But the biggest problem for me when I work from home is that my kitchen is possessed. Seriously, just like the tv in Poltergeist, my fridge comes alive, whispering my name over and over reciting the contents inside like a hooker in Amsterdam seducing a tourist, “April, come see what I have for you. Taste this sweet, juicy, tempting little snack. Just one bite, baby, one tiny little bite won’t hurt you, I promise. You know you want me. You’ve been such a good girl, you deserve a reward…”

I’m a weak woman. I give in to temptation, distraction, warm beds. I cannot work from home. So I’ve tried cafes but once added up how much I was spending on coffees, snacks, and lunches, and I was stunned at the amount.

So I finally joined a coworking space. There are plenty in Brooklyn to choose from, but I became a member at electropositive in Brooklyn and I cannot believe I didn’t do this years ago. It’s a game changer! 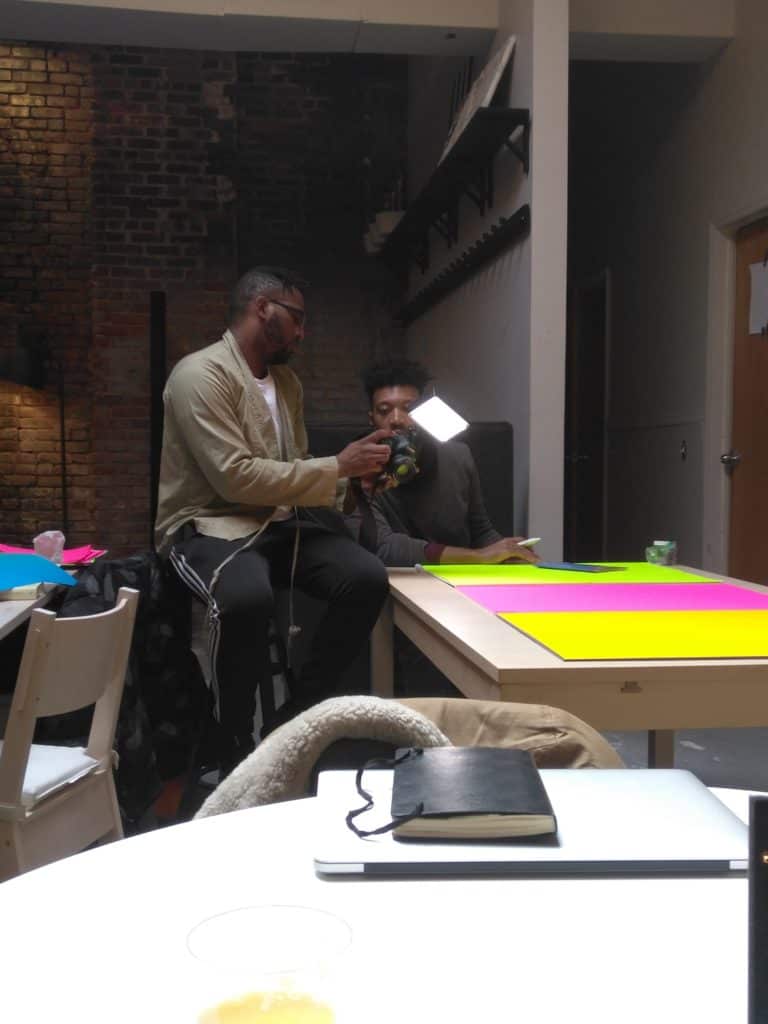 Weekdays I get to my new “office” around 9:30 am and work until dinnertime, but as a member, I have a key and 24-hour access to the building. There are conference rooms, a main, shared space with couches and comfy chairs, private offices, free wifi, free electricity, and free coffee and snacks. There’s a sleek, new kitchen, and a podcast room. There’s also a photography studio and a rooftop area where members can sit and work during the spring/ summer. Hell, yeah.

In the first few weeks, I met four freelance writers, a fitness blogger who offered to write a guest post for my site on staying fit while traveling, a writer who specializes in sex and relationship articles, and several photographers. I met brand experts and entrepreneurs. I held a travel blogger meetup at the space. I planned several travel writing workshops which will be held there, a well. I had a meeting with a client I do proofreading for in my “office”. I also scheduled meetings three days a week to work with a website expert/ PR person to make some major changes on my site. 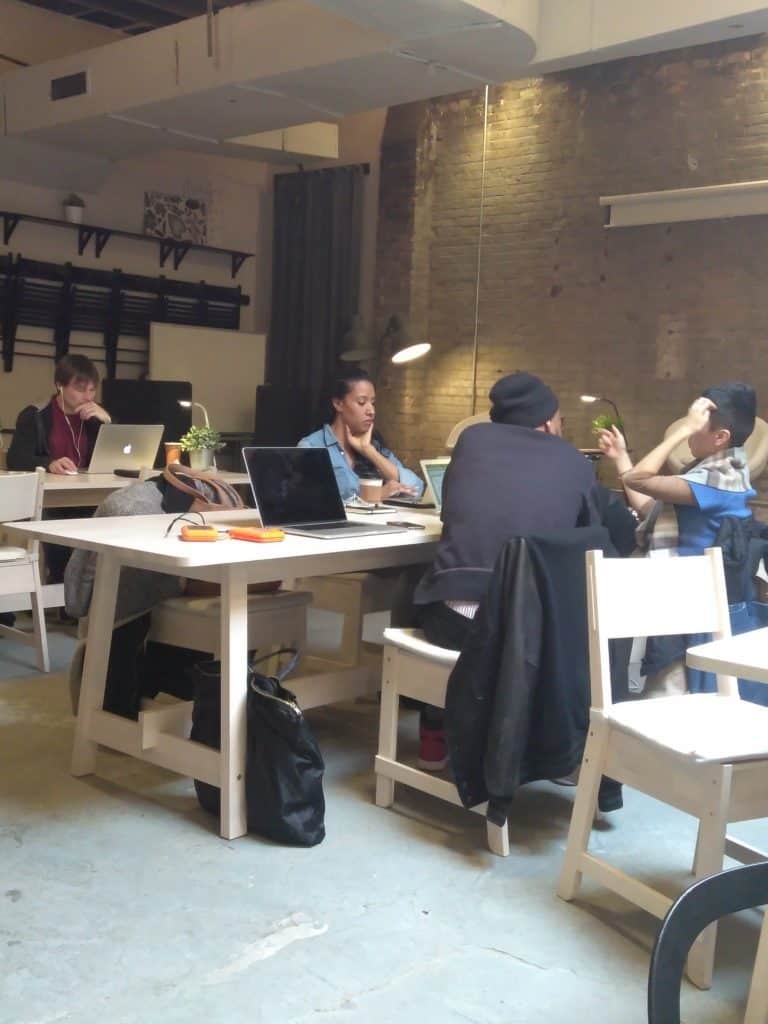 I began organizing a blogger event to be held at electropositive with a powerful influencer as the guest speaker. Kamarin Lee, the organizer of the “Paid to Travel Summit”, (the largest conference of its kind) will teach attendees how to basically kick ass and blow up brands.

Yet another bonus; the second day at the coworker space I met a travel blogger I admire, Jessica Nabongo who is planning a Travel Talk event at electropositive on April 4. (Members get to attend free.)

I’m constantly inspired all day being around creative, passionate people, networking, and hoping some of their genius will rub off on me. Getting to my “office” every day has made a huge difference already. I feel 10 times more productive, organized and motivated. I feel like I’m part of a family and that electropoitive is home- but I’ll be honest. I secretly love being surrounded by all the gorgeous members. I’m sorry, I know I’m supposed to be busy working, not drooling over people, but damn they’re fine. Just sayin’!

I visit your blog. It is really useful and easy to understand. Hope everyone get benefit. Thanks for sharing your Knowledge and experience with us.”

Awesome. Read it till the end word. As a marketing professional at I must say, your blog is so engaging and yet very informative and resourceful. keep up the good work.

That’s so sweet, thank you, Laura.

Thanks for sharing.It’s really good information.

Are you ready to start your journey?
Follow us and we'll show you how!