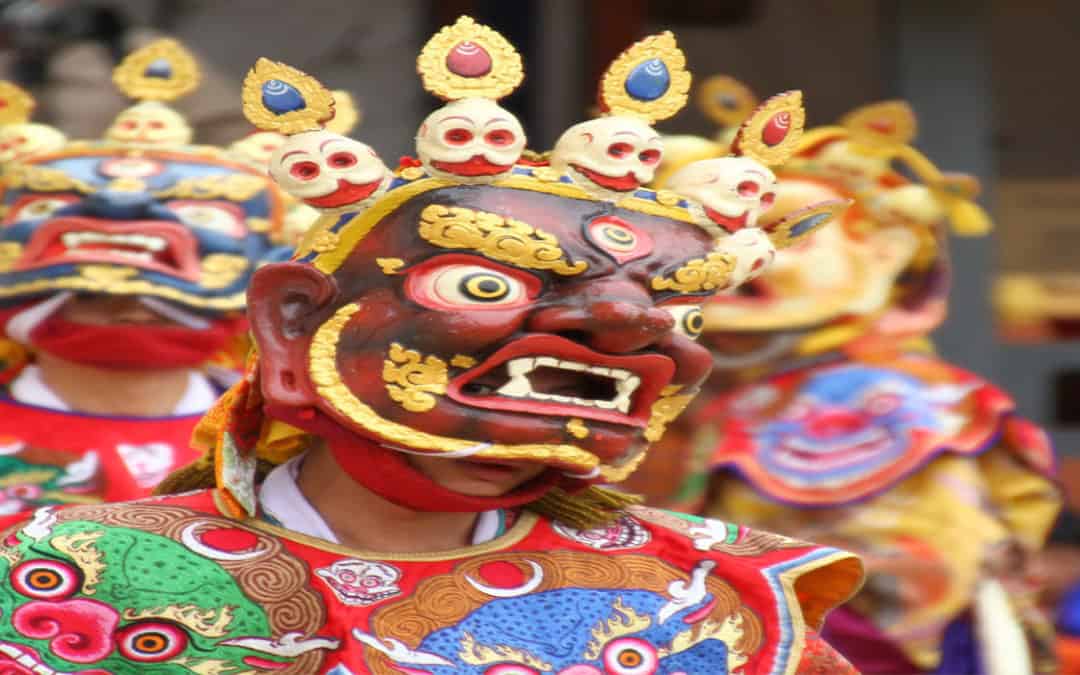 The Sacred Naked Dance Festival, or Jambay Lhakhang Drup, is held annualy in Bhutan for two reasons; to commemorate the establishment of the Jambay Lhakhang Temple in the 7th century, and to honor Guru Rimpoche, a saint who introduced a Tantric form of Buddhism in Bhutan. A variety of traditional and mask dances are performed and each dance bears significant meaning and importance.

The “Tercham” or the sacred naked dance, is one of the festival’s highlights and a well-known item among the spectators. Exactly at midnight, sixteen naked men sprint out of the monastery’s door galloping in the air to the rhythmic accompaniment of the beatings of the traditional drums and cymbals. These dancers are completely naked except for their faces, which are covered in white cloths and masks. They are the sacred naked dancers of the Jambay Lhakhang Temple, and this dance is known as the “Tercham”.

It is believed that the dance was introduced by the great treasure discoverer, Tertoen Dorji Lingpa, on the prophecy of the Guru Rimpoche in the 8th century.

The dance originated from Nabji Korphu in Trongsa Disrict, central Bhutan. The demons delayed the construction of the monastery by destroying it in every night. Tertoen Dorji Lingpa launched this sacred dance to distract the demons.

In due course of time, the monastery was completed and consecrated. Tertoen Dorji Lingpa brought the dance to Jambay Lhakhang during its consecration.

Jampey Lhakhang temple is revered as one of the oldest temples in Bhutan. Like Kyichu Temple in Paro western Bhutan, it is said to date back to the 7th century. To overcome the demon that was encompassing Tibet and other Himalayan regions and threatening Buddhism, King Songtsengoenpo built this temple.

The locals describe this sacred dance as one of the most well regarded in Bumthang in central Bhutan. They believe that the penis is one of the most precious treasures, as all sentient beings are brought into the world by this organ.

Their dance around the fire near families and friends causes tremendous discomfort and embarrassment for the 16 performers, but they are proud to be a part of the sacred dance and perform the ritual in order to gain immense blessings. Friends who recognized the performers were not allowed to call their names out in the crowd, but enjoy the festivities, music and dancing together.

If you want to attend this festival, or to find out why Bhutan has been named by Lonely Planet and others as the top travel destination in the world in 2020, contact one of Bhutan’s best tour companies, Eureka Expeditions. If you give the code “Wanderlusty20” you will receive a 20% on your first tour!

Have you been to Bhutan, or is it on your bucket list? Or…are you more interested in seeing a bunch of naked penises dancing around? I can’t lie…I’d love to check out this festival on my next trip to Bhutan!