Politics and Punanny; Should You Discuss Trump on a First Date? 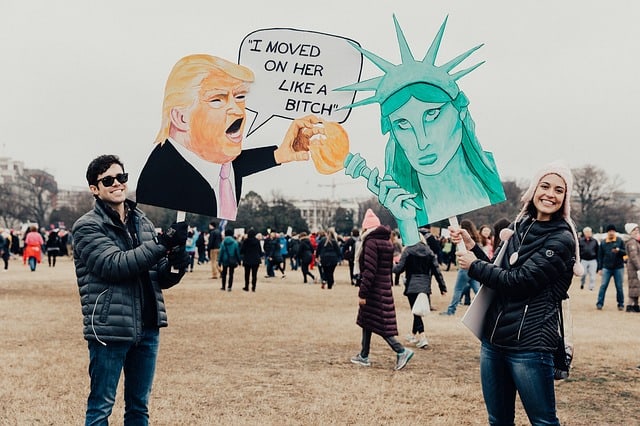 I’m not dating right now. I’m focusing on other things, like writing posts about the amazing destinations I visited in the past year.

But recently a fine, smart, ultra successful, articulate, educated, (did I mention fine?) sexy man let me know he was interested and I momentarily had amnesia and completely forgot about my goals and priorities.

I am a weak woman.

My Alzheimer’s kicked in and suddenly I couldn’t remember why I was taking a dating hiatus. In fact, I almost forgot my name and stuttered to get it out.

My “punnany” took over the conversation like a crackhead on a mission, and I let her. I know there’s a point of no return when my vagina cannot take one more minute of my self-imposed celibacy, and even though she has accepted the drought like a fat kid at summer camp mourning the loss of chocolate, I’m okay with her getting her kicks through verbal intercourse.

So I get it and allowed my body to take over; not a date, mind you, just an “innocent” conversation.

I drooled as he told me about the challenges of traveling around the world (first class) and about his love for fine dining and how he wished he could meet a soul mate with a mutual love for jet-setting.

The food addict/ travel lover in me began fantasizing about what it would be like to forgo hostels for 5 star establishments and giving up food carts for restaurants where not only did men have to wear shoes, but ties and jackets, too.

But then the topic of deal breakers came up, and although my list is pretty low (don’t be {currently} in jail, don’t be living with your mother or in a “situation”, be able to buy your own MetroCard, and have {some} teeth) I told him one of mine; don’t be someone who voted for Trump.

I blinked and asked him, “Oh, um, are you a Republican?”

“Well, I am a capitalist, and I don’t believe in labels. But I can’t believe you just said that.” 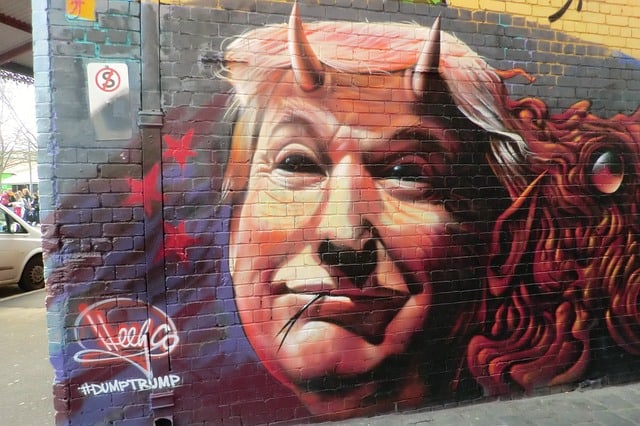 I stuttered some more as my fantasy of flying 1st class on Emirates with my future baby daddy dissolved quicker than the royal family’s love for Diana, but our conversation ended faster than a hooker’s $10 bj.

I have gone on dates with men who I later learned were Republicans, and I think some couples can work through their political differences and have a relationship.
And I can continue having relationships with acquaintances who voted for Trump as long as we can be mutually respectful. For example, I was surprised to learn that my exterminator voted for Trump, that I wasn’t going to stop him from making sure my place is free of mice, bugs and creepy crawlers. He’s good at what he does.
But being in an intimate, romantic relationship with a Trump supporter for me would be impossible.
“Honey, I believe a man who is openly racist, sexist, misogynist who brags about sexually molesting women, who has been accused of raping young girls and who encourages violence and white supremacy should have the responsibility, privilege, and power to control our country.”
Um, no, you can’t f* me tonight, ’cause you just made my punanny dry up like a date tree in Dahab.

What are your dating deal breakers?

Could you see yourself dating (or marrying) a Trump supporter?

Do you think the rule about never discussing politics with a potential romantic partner is a good rule, or do you want to know asap who you’re dealing with?

I’m happily married but I found this post hilarious but posing an excellent question.

It is a tough question. As I get older I wonder if maybe my standards are too high. I mean, should I really only date men with teeth? 😉

More and more politics are dictating principles which are informing values; instead of principals being based on truth and born in love, leading us to values that inform our political affiliations. Maybe we should start discussing principles and then politics…? Not sure which people take more personally.

Thanks for checking out the blog. 🙂

I would have found out BEFORE the date, and that would have been the end.

Yes, I’m glad we discussed this before we actually went out. The issue was not solely whether or not he had voted for Trump, but his shocked reaction to the fact that it was a deal breaker for me that let me know it was a wrap.