The Romance and History of Hookers and the Irish Claddagh Ring 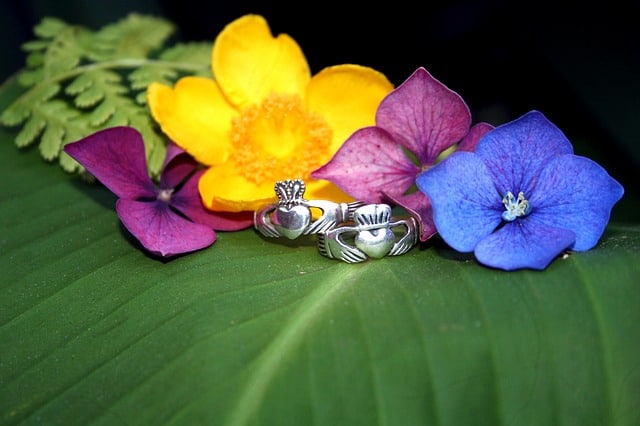 What do hookers and the Irish Claddagh ring have in common? A romantic history steeped in tradition and loyalty.

The ring, made up of a heart (representing love), a crown (symbolizing loyalty and commitment), and two hands and comes from the 17th century from the Claddagh village in Galway, Ireland.

There are several legends of where the Claddagh ring originates, but most stories agree that the ring was first created in the Claddagh, an old fishing village near Galway City. ‘Hookers’, is the traditional name for the old sailing boats used by local fisherman in the area, and every year the Blessing of the Bay Festival is held at the start of herring season since 1488. Today, modern yachts and boats join the hookers in August and are blessed by a priest who performs the blessing on one of the boats and rings a bell, signaling local altar boys to sing. The boats parade around the bay in a stunning tour while tourists and locals join in the festivities.

Although there are many versions of the legend, the ring stands for fidelity, love and romance in Irish culture. One of the most popular stories tells the love story of Richard Joyce, a sailor from the village of Claddagh who set sail for the West Indies in the 17th century. Joyce and his entire crew were kidnapped by pirates and were sold into slavery along the way. He was bought by a goldsmith and became an expert jewelry maker under his master’s tutelage until 1689 when an amnesty was declared and William II, King of England, demanded the release of all slaves in the kingdom.

During his time as a slave, Joyce’s master was so impressed by him that he offered Joyce half of his wealth and his daughter’s hand in marriage. However, Joyce longed to be reunited with his lover back home in Claddagh, and while it is unknown whether he was released, or escaped, but when he returned home to his village he found his beloved waiting.

When he arrived, he presented her with a gift which could have gotten him killed. Each day as a slave he had stolen a tiny bit of gold from his master, which he eventually used to design a special ring for her. He married his lady and started a goldsmith shop where he created many “Claddagh” rings, and the famous Irish tradition was born.

If you’re lucky enough to have a Claddagh ring, make sure you wear it properly since it tells the world whether you are taken or available.

If you are Single

If you are single and looking for love, wear your ring on the ring finger of your right hand, with the heart facing outwards.

If you’re Single but Taken

Wear your ring with the heart facing toward your heart to show that you’re involved. Make sure the heart points towards the center of your hand. Until you are engaged, the ring stays on your right ring finger.

Once you’re engaged, wear the Claddagh on the ring finger of your left hand to tell the world you’re no longer available for dating.

Once married your special ring is worn with the heart facing in. Many people choose to use the Claddagh ring as a wedding band and change the direction of the heart during the wedding ceremony.

Do you wear a Claddagh ring or another ring that represents a special tradition?

I’m looking for a new place to go with my boyfriend. I would not have considered Ireland before, but after reading about it on your blog, I’m going to check it out.

To be honest it was never really at the top of my bucket list either. I went for a conference and fell in love with Ireland! It is a wonderful, magical place. And, I stayed at a quaint little place called The Shire, modeled after Lord of the Rings!

Ireland looks so beautiful, I had no idea it was so romantic.

I was surprised, too. It is one of the most beautiful, magical places I’ve ever been to.

Wow thanks for the info, I love it

Thank you, I’m glad you liked it!

Hi guys, my name is Hillary!

I`m a professional writer and I`m really excited to have found your site! Thank you for the travel tips as well as the info on starting a blog.

Hi Hillary! Thank you so much. Good luck with your blog.

I never knew where the irish ring came from. Col post!

What a beautiful. romantic story. Thank you.

It is romantic; I hope to return to Ireland with a lover someday and stay in a castle.

Have you been to China? You should come! I have not been to Ireland but it is on my list.

I had no idea they were “hookers”, lol! That’s funny.

I know, it was a surprise to me as well.

So glad I found your site, thank you.

Thank you for taking the time to read it.

broke, but now I see that I can still take a trip. Your tips on budget travel will help me. thanks

Stay tuned for more to come…

Thank you so much for your nice comment. Stay tuned for more articles coming soon. 🙂

Thank you for the great travel tips!

Your welcome. Thank you for being a reader. 🙂

Thats a nice Info,would love a ring like that….:)

It wasn’t easy finding them even in Ireland, but you can get them in nicer jewelry shops in the States, and in some places around the world. My suggestion is to go on Amazon.

Thank you so much! Happy travels 🙂

I like this type of post even better than your “10 Best Places” type of posts. I never knew how funny you were. I’d love to read more about your dating experiences while traveling.

Another fantastic story! Thank you.

This was funny, but I like your articles on budget travel because I never thought I could afford to visit the places you write about, but I’ve crossed off two countries on my bucket list because of you! Please keep writing more about how much you actually spend to travel to these places especially Asia since I’ve never been yet but it’s next on my list! Thanks for such great tips!

This post was pretty funny, and I enjoyed reading it, but you got me curious about AirBnB enough to finally check it out. I was reluctant to consider using it before, but after reading more about it, I think I’m going to give it a try next time I travel in a few weeks. Thanks!

I love AirBnB. Let me know how it works out for you.

I love older women. Not all young guys are like this, some are pretty mature, and love to travel with an adventurous, smart, savvy woman.

Ahh, you’re only as old as the people you sleep with! So funny, thanks for this!

If only that were true, lol.

I’m a cougar, and proud of it, lol. I love dating younger men!

I’m still not convinced to use AirBnB, and I’m DEF never going to be a host, but I do love reading your stories here. Please review more hotels in Europe, I’m planning a trip soon. Thanks!

I love using AirBnB! This was a cute story. I’d love to see more AirBnB stories.

I’ll work on it. I love AirBnB too.

Thank you so much.

How can I be a guest contributor?

We do welcome submissions for guest blog posts on our site, as long as it focuses on romance/ dating and travel (whether you are currently single or in a relationship). Please check out our guidelines here; https://lovelustorbust.com/about/submit-to-us/

Hi guys, my name is Sean. I would love to share a similar story about a ring I bought while traveling abroad. Do you accept submissions?

We do! See our guidelines here; https://lovelustorbust.com/about/submit-to-us/

Hi, my name is Mark Kormann!

I`m an academic writer.
Writing has been my passion for a long time and now I cannot imagine my life without it. Reading your articles inspires me to write my own stories.

Mark, why don’t you submit your stories to us? https://lovelustorbust.com/about/submit-to-us/

That’s fantastic! Please submit your stories to us if they’re a good fit. https://lovelustorbust.com/about/submit-to-us/

I love that you post articles on romance and some sexier, racier subjects. You’ve got something for everyone!

Hey guys, I am Mark a professional writer. I love your blog and would like to do a guest post. Do you accept guests blog posts?

I didn’t realize there were so many meanings of this ring.
Thanks!

I’m about to be married, so I loved this article!

Thank you, very informative. I love your site.

I love your blog, you write about things I don’t read anywhere else.

I’ve had my ring for more than 10 years, and I never knew the legend. Thanks!

Romantic, but no hookers? Damn.

This is more romantic than I thought. Nice story.

I’ve been to Ireland and never knew the history.

Thank you so much!

I know Irish claddagh ring and I think it is beautiful, such as this https://gthic.com/products/irish-claddagh-stainless-steel-ring?_pos=1&_sid=c4a48a068&_ss=r. However, I don’t know the story about it. Your post really give me inspiration. Thanks so much.