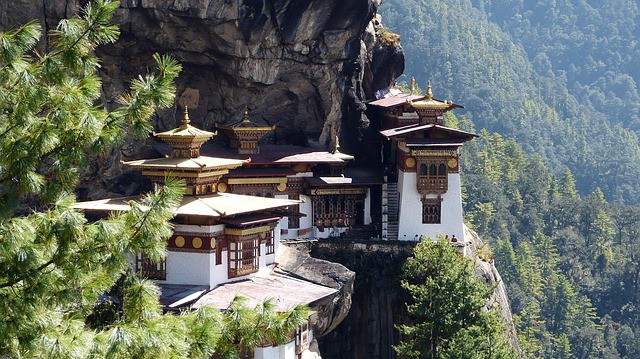 At the foothills of the Himalayan Ranges lies Bhutan. Hidden deep in the folds of the great Himalaya Mountains for years, Bhutan developed its own civilization. The population of about 700,000 people lives in close harmony with nature. Over the years, Bhutan has formed a unique identity, derived largely from a rich religious and cultural heritage. Today, the world can see many exotic aspects of this kingdom.

Bhutan is becoming increasingly known for its pure practice of Mahayana Buddhism in the Tantric form; its untouched culture, its pristine ecology and wildlife, and the unparalleled scenic beauty of its majestic peaks and lush valleys. It is still, in many ways, a magical kingdom of the past.

Its development philosophy is affixed on the belief that material pursuit alone will not fulfill the ultimate desire of happiness in humans, and that a balance must be struck between the spiritual and material needs by creating an advantageous environment.

It is a small mountainous nation living in harmony with nature growing peace and tranquil. Cautiously leaving its isolation policy in 1965, Bhutan has a long way to develop. Most choose to visit Bhutan for a true vacation and to immerse themselves in the abundance of nature that was robbed off by the concrete jungle. They visit to celebrate their hearts.

The gushing rivers below the high-hanging suspension bridges, the waterfall-alike cascading terraces of paddy fields, valleys in all manifest of geographical features, the narrow roads unwinding from the foot of the valley to the highest mountain passes and snow-capped mountain to the last of the horizon: all this makes Bhutan a beautiful place to visit.

Living through the basket of nature, Bhutanese people revere the environment and pays homage in so many ways, one reason that the highest mountains are not scaled in Bhutan. The Bhutanese constitution also commands that the country should “at all times preserve 60% of its forest cover.”

Owing to the intactness of culture and traditions, the ancient Bhutanese lifestyle is still there to witness. The valleys transformed, but they are still living in the medieval era. Bhutan continues to celebrate its ancient festivals. There is always time to celebrate the aesthetic beauty of life.

Bhutanese people are very hospitable and smile easily. Most people learn about Bhutan by talking to locals who love their country. A guest that arrives at their door must be welcomed for a hot buttery tea.

In short, Bhutan is home to cultural travelers, eco-travelers & adventure-seeking tourists who long to unwind and find peace.

Bhutan is still an unknown & mysterious country to the outside world. The concept or the idea of tourism in Bhutan is fairly recent in the past few years. It is also called the “single or one-time destination” for tourists because of its tourism policy; “high value, low impact” adding to the allure of Bhutan for visitors.

Bhutan has one of the richest bio-diversity. Its flora and fauna are unmatched in the world.  If you’re fascinated by bird-watching, you will absolutely love Bhutan with over 700 species, compared to only just 900 species in North America, and many are extremely rare and native, such as the “Golden Langur”, and the “white Bellied Heron”; both found in Bhutan.

Bhutan’s guiding philosophy is also telling; “Gross National Happiness” means its citizen’s happiness is not just only measured by wealth, but by spiritual health. There is a golden mixture of material well-being and prosperity and spiritual which combined creates an overwhelming feeling of peace and joy in its people.

Bhutan’s location makes it the perfect tropical zone for growing almost every crop of fruit and vegetables in both the northern and southern parts of the country.

A very unique, traditional architecture remains alive in Bhutan. All buildings are constructed with multi-colored wood frontages, small arched windows, and sloping roofs. Walls of homes in Western Bhutan are frequently earthen walls pounded into wooden frames and rendered with lime. Completed mud walls may be left in their natural state or whitewashed. In the wetter, Eastern valleys of Bhutan where settlements are dug directly into mountainsides, the walls are more often made of stone. No plans are drawn up, nor are nails or iron bars used in the construction.

Unlike other types of Asian attire, Bhutanese men wear heavy, knee-length robes tied with belts called “Gho”, folded in such a way to form a pocket in front of the stomach. Women wear colorful blouses over which they fold and clasp a large rectangular cloth called a “Kira”, creating an ankle-length dress. A short silk jacket or “Toego” may be worn over the Kira.

Bhutanese people tend to be warm, welcoming, humble people. Often you will find locals to be extremely happy & friendly. Because of their great generosity, Bhutan does seem to open its arms wide to welcome tourists and visitors who fall in love with its calm, peaceful environment.

Whether you are interested in hiking, bird-watching, photography, or just being led by an expert to discover why Bhutan is one of the most spectacular places in the world to visit, consider speaking with one of the top guides in the country to discuss what your custom, tailored dream trip would consist of. Click here for more information.

Use discount code “Wanderlusty20” for a 20% discount off your first tour.